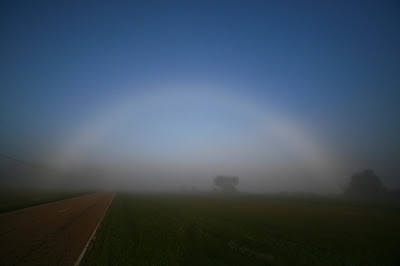 This is the sight that I discovered while shooting photos at sunrise on Sunday, Oct. 25. As usual, I couldn't sleep and so headed toward the rail trestle over the Big Black to see if I could get a picture of the sun rising over that magnificent structure. But I got there and it was completely fogged in. Took a few pictures and then headed out on Hwy. 80 toward Edwards. It was Fog City! The photo below is one I took inside the fogbank. It was a classic battle of the sun fighting to gain the upperhand, but the fogbank wanted to live as long as it could. I finally broke through the fog near the cotton fields right there before you get to the Bonner-Campbell Institute. I turned around as and as I headed back to Vicksburg, I couldn't help but notice that one patch of fog on my left was extremely brighter than the fog around it and that a patch on the right side of me was brighter than the fog around it. I couldn't figure it out, so I stopped and got out of my truck to ponder the situation. I was greeted with this fog rainbow! How glorious! In 49 years of living I have never seen anything like it! Has anyone? I took some other great pictures on this morning and will share them with you later. And wait until you see what some friends and I were blessed to see on Saturday! 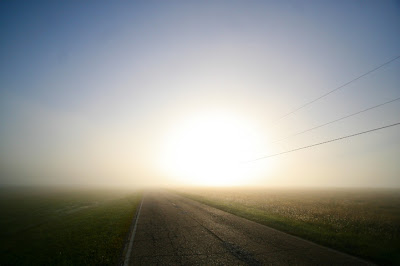 High-resolution photos can be found at:
www.martykittrell.com.
Click on any photo to make it larger for easier viewing.