Birds in the Park 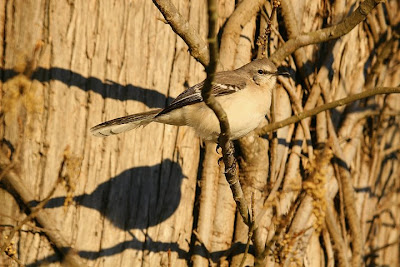 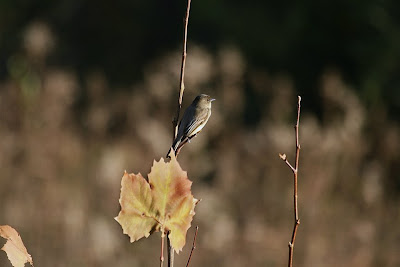 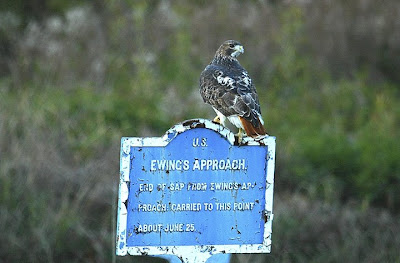 I will take a picture of anything just about. That's especially true of birds. I can't resist seeing how close I can get for a photo. Some birds cooperate. Others don't.
Don't ask me what kind of birds these are. I have taken them in the last month on my many treks through the Vicksburg National Military Park. I don't know what kind they are. The last one is a red-tailed hawk, I think. And if I guessed on the others, I would guess wrong. For I have tried to identify birds in the past and have failed miserably. They never look like they do in the book.
So if you are a birder, then post a comment and tell us what kinds of birds these are.  I would appreciate it.
Most birders, however, can't put up with someone like me. Let me tell you a story. I was invited to an outdoors festival a few years ago. I decided to go on the birding expedition and hopped up in a bus that had the top completely cut off. Figured I could get some good pictures of some birds along the way. It was me and a whole buncha birders. We were traveling along and one yelled out, "There's a long-neck speckled grouchamabobbie!" Or something like that. Instantly, everybody on that bus stood up and brought binoculars to their faces in one quick and efficient motion. Except me. I didn't have any. Didn't know to bring any. Didn't own any. They all turned in the same direction and started watching some little white specks that looked about a mile away. They got all excited about those birds and off we took again. An old hawk flew overhead at one point and somebody on the bus actually clapped! I'm not lying! Up went the binoculars. Later, I had made my way to the back of the bus because nobody would let me use their binoculars whenever we stopped. And as luck would have it, I spotted a bird on my own while all the others were observing some brown specks two miles away. "Big red bird, big red bird!" I  yelled at the top of my lungs and pointed into the brush. Two little old ladies pushed me aside and saw the big red bird. Quick as a flash, one of them pulled out a guidebook, thumbed through it quickly and pointed out a certain bird on a page. Without a smile or anything, she pushed it under my nose and said, "That, young man, is a prothonetary warbler, male, juvenile." I thanked her for the observation, but told her I was more than capable of classifying birds. In this instance I told her that was a big red bird, as opposed to a little red bird. She did not take kindly to that and I swear a couple of people tried to push me off the bus on the way home.

be found at:
www.martykittrell.com.
Click on any photo to make it larger for easier viewing.